When your #autistic sensory issues shut down your communication 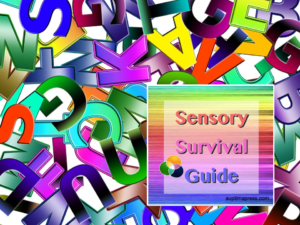 We can get so overwhelmed by sensory input, none of the words or social signals make sense.

I talked last time about how sensory issues (hyper- and hyposensitivity) can make life… interesting. The thing is, they don’t just complicate our own lives. Sensory issues also make interacting with the rest of the world very, very challenging.

Some researchers, like Olga Bogdashina, have been advocating that the mainstream take a closer look at our sensory issues and see how they are actually affecting our ability to interact with the world — and communicate. A recent “autism awareness” campaign showed the point of view of a young boy in a shopping mall who was overwhelmed by sensory input and just shut down. To the outside world he had become a “behavior problem”.

Those of us on the autism spectrum don’t need experts and non-profit organizations to tell us that sensory issues impact our communication. Some of us have been trying to bring that point home to the non-autistic world for quite some time — to no avail. ‘Cause seriously, it’s tough to sustain the levels of energy necessary to get people’s attention and get them to understand why they should even care / believe you, when the stress of doing so is spiking your own sensory issues… which then impedes your own ability to communicate.

Communication is a two-way process, and it’s about more than hearing words, understanding them and saying something in return. People communicate with their bodies, their motions, their limbs, their eyes, their posture, their orientation towards you. There’s a lot involved in even “simple” communication.

And when your system is super taxed by fending off the attacks of too much light, too much sound, too much activity, too much … everything… as your stress level rises and you become even more sensitive to what’s going on around you… sheesh. It’s a wonder we can communicate at all.

Let’s take the most obvious scenario of talking to someone. “Just” talking, right? How hard can it be?

Your co-workers stop by, one by one, and say “Good morning!” This is their usual Monday morning ritual, and they seem to really thrive on it. They love to compare notes about what they did over the weekend, especially if it involves watching a ballgame of some kind. They make it look so easy, so effortless.

And it never seems to work out with you. First thing on Mondays, you’re tired, you’re transitioning into the week, and you have a hard time parsing what they’re saying to you, let alone responding in kind. If only they’d talk about things you care about — like changing migratory patterns of reindeer in Lapland, or how amazing the new matte book covers of popular paperbacks feel to the touch.

Today is no different. Everybody wants to talk. They pause briefly at your cubicle entrance to chat. But you don’t respond. You barely hear them. The sun is streaming in, blinding you… the growl and sputter of the single-cup coffee maker blends with the garbled voices in the distance… the whooshing overhead heat sends a steady, distracting breeze directly on your neck… your temper is rising because your computer has decided to die on you at just the time when you need it most… and you can’t decide whether to keep your coat on (it’s cold), or take it off (your neck is getting hot).

Your co-workers can see you’re busy, but they also get a little miffed that you didn’t respond to them. “What — are you anti-social this morning?” you sense them thinking. You can’t help picking up on their sentiments. You’re super-sensitive that way.  Some of them seem to forgive you, as they move on, while others seem distinctly annoyed. They’re hurt. Feeling rejected. You can practically hear them thinking “Nobody likes coming to work on Monday morning. Just deal with it and be friendly, okay?”

You pick up the phone to call IT — the horror — and you plug your free ear, so you can concentrate on what the prompts are telling you to do. The sun is bright, the overhead breeze is light but distracting, and the murmur of voices behind you are distracting. Plus, people keep stopping by to say “Hello” on this Monday morning. (Will it never end?) As you reach for a pen to write down some instructions you just heard, your sleeve rakes along your wrist — scratchy and burning. You push your sleeves up angrily, shielding your eyes from the sun and telling yourself, “It’ll be alright… It’ll be alright…”

A tech guy comes on the phone and asks you a bunch of questions, most of which he has to repeat at least once. There’s too much information coming in. Too much information. He’s talking about following steps that you’ve never done before, and in your mind’s eye, where you visualize everything you do, you cannot see what the next steps will be. This is unique. You don’t know where you’re going, or what you’re doing. His words echo in your ears, as your mind tries to construct an image of what exactly you’re supposed to be doing. Too much input… too much input… And that overhead breeze…

You ask him to hold for a moment as you put down the phone and rip off your jacket, tossing it in the corner of your cubicle. Some of your passing co-workers comment about you being “in a mood” this morning as they return to their desks in chattering clusters of glittering jewelry, clouds of perfume, and thumping high heels. You glance at them briefly, on reflex, trying to concentrate on just getting back on the phone. You hear them commenting with dismay at what a bad mood you seem to be in. They apparently took it personally when you glanced at them, even though you were barely aware they even existed at that moment.

Ultimately, the computer situation works itself out. IT has you reboot the machine and go through some extra steps. And by the time you’re up and running again, the busy-ness around the coffee machine has calmed down. The heat has turned off overhead, and the sun has moved to another position that’s less obnoxious. But you’re exhausted, and half your co-workers apparently think you hate them, while the other half are mildly amused at your discombobulated nature.

As you get on with your day and stop by people’s cubicles to ask them questions, the frenzy of the morning still weighs on you. And a bunch of people are still irritated with you.

Just a few more hours, then I’m out of here, you reassure yourself, trying to concentrate on the important things. Like getting something done. And eating lunch — the tasty egg salad sandwich you packed for yourself that morning.

Many of us have had experiences like this — for some of us, this is “business as usual”. Some have a more challenging time of it, while others can make it through pretty well. If you’re on the autism spectrum, though, chances are pretty good the above scenario sounds pretty familiar.

So, what do we do in these situations? Everybody has a slightly different approach, and many of us do a variety of things, depending on our relative stress / sensitivity levels.

Some of us suck it up and soldier through. We tough it out, through the pain, discomfort, and confusion, and we do a passable job of interacting with others. We don’t worry about being socially successful. We just want to do the barest of essentials to get to the end of the interaction.

Some of us do a fabulous fake job. We pretend we know what’s going on. (I do this all the time.) We imitate the others around us, mirroring their actions, gestures, body language, even their speech patterns, so they think we’re getting along great with them.

Some of us genuinely try to connect with others. This can be hit-or-miss. Either it works, or it doesn’t. And when it doesn’t the other person can feel faintly uncomfortable, though they may not know why. When it does work, though, it can be euphoric — absolutely transporting! Success! Actual social success!

Some of us run away. Run away!!! We’ve tried and tried, and it never seems to work, so we just don’t bother, anymore. People think of us a “loners” (or “losers”) and may try to reach out. Or they may get fed up with us and not even bother. We make them feel uncomfortable. And nobody likes that — especially non-autistic people who “just” want to chat.

Whatever we do, whatever we achieve (or don’t), there are a number of ways we can approach the situation.

But the bottom line is, sensory issues do interfere with our social interactions. They suck up our cognitive processing resources. They distract us and use up energy that other people seem to have in abundance. And when our stress levels get high, well, things can get even worse.

Communication… for some of us, it’s a wonder we even try at all.

Have a sensory story of your own? Share it with us in the comments below!