A natural phenomenon or a mathematical set

that exhibits a repeating pattern

that is infinitely displayed at every scale. 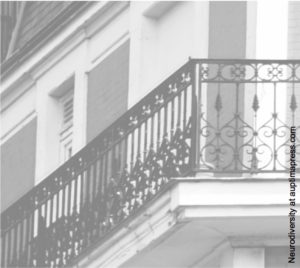 He was smooth, sleek, cool, beautiful. The girl was too young to know that she should be afraid as he wrapped himself around her little torso. He could have crushed her if the herpetologists had not kept him well fed with rats and other small prey. But she had only just learned to walk and wasn’t encumbered with such thoughts. His imprint, the fascination would remain an antidote to other people’s disgust, fear and allusions to original sin. She would be afraid. But not of this. She would taste sin, but there would be no one and nothing, least of all this creature to blame for her transgressions.

When death comes to you, time slows. You know what it looks like, tastes like, smells like. I can still see it to this day. The dark crack across the pavement two stories below the iron balcony with dusty black licorice twisted spindles and the chunky girl in red.

I was almost two years old when we moved into the second story apartment with the balcony in this seedy Denver neighborhood. I’m not certain, but I suspect this is when the nightmares started. We lived directly above the chunky girl in red and catty-corner to Jack Frost. People called him that because he was rumored to deal in mind-altering substances for a living.

I distinctly remember my mother cleaning his apartment when he finally moved out two years later. While she kept my younger brother safely guarded in his playpen, I was allowed to roam freely about the living room.

There were needles and little round white pills with X’s on their tops strewn across the neglected brown shag. At the time, they meant nothing to me. I simply observed and moved on and whether the rumors were correct about his profession I can not confirm.

Regardless, I was fond of Jack Frost. He was kind to me and engaged in conversations to my liking. He did not patronize. His hair was long and blond, platinum to be exact. His skin was fair and he was lean. I thought of him as a supernatural being, perhaps an elf or maybe even THE Jack Frost.

Santa Clause did not exist. I knew this to be a fact because my mother had told me so. Jolly men dressed up in red suits to make children and more importantly, their parents happy. But no one had questioned the existence of Jack Frost. I would sometimes imagine him crystallizing into an icy film across the window where my cheek rested in the back of my parents green Oldsmobile or swirling up into the sky as I filled my lungs with crisp winter air.

As time passed, memories of Jack Frost got filed away until one day in Mrs. Thompson’s Freshman English class Donny turned around in his desk to face me. Donny was Arapaho and though I wasn’t thinking it at the time, if there was a visual yin to Jack Frost, he was it. Black hair, deep brown eyes and smooth dark skin. Donny always had interesting things to tell me and I enjoyed his company though I never understood exactly why he (or any other student for that matter) talked to me.

I do not remember much of what he told me that day, but he asked if I knew what a “cross top” was. Suddenly an image of Jack Frost in his brown corduroy jacket and his messy shag carpet strewn with little white pills flashed through my mind.

“Speed.” Donny leaned over my desk and quietly said it again. “It’s speed”. I felt a burst of odd satisfaction and sad nostalgia all wrapped into one.

I now had a name for those little white pills and the cryptic scenes from my childhood suddenly made sense, bridging the synapses and sending a warm tingly current through my veins.

After all these years I suddenly wanted to know what had happened to Jack Frost.  Did he have a family? Was he happy or did he end up strung out on those little white pills sleeping in culverts in cold and lonely desperation? These were futile questions to ask. There would be no answers. Only distant memories of a man whose real name I never even knew. 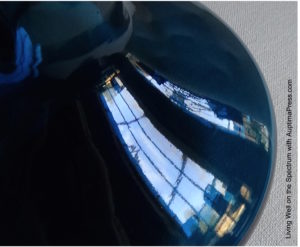 I am told that not everyone has detailed memories of early childhood and that some people’s thoughts are dominated by words instead of images. But my early memories remain vivid as do the emotional imprints they left behind.

Colored glass had a particularly powerful effect over me and I would spend hours watching the light bend through any window, lamp or vase with a hint of color. This is how I broke my mother’s green heirloom pitcher. I took it outside onto the sidewalk to see the sun shine through.

I remember the dark purple lead glass window on the door of a white stucco house as my father held me in his arms next to his new tee shirt and Old Spice aftershave. I do not know how to describe the window’s captivating effect on me but I do know that I had the capacity to recognize beauty and it’s emotional pull even then, long before the bits and pieces of my life ever came together to make sense.

My mother bought me my first paint set when I was 18 months old. I was already potty trained and had a precocious vocabulary. I’m sure she anticipated my painting skills would equal these toddler accomplishments but I was only interested in one thing, creating big black spots on every blank sheet of paper I could get my hands on. This obsession lasted for two years until one day, I gave my mother a picture with a rainbow and “budderflies”. I never painted black spots again.

My mother did her best to give me opportunities to explore the world but even the daily ritual of getting dressed was complicated. Tags and seams felt “sharp” against my skin and much of my day was focused on the discomfort from the very clothing that was meant to protect from the harsh Colorado elements.

A poorly placed sock seam could consume my entire awareness. I would kick and cry and my mother would try to earnestly rearrange the offending fabric. Sometimes her efforts were successful. Sometimes no amount of wiggling and shifting could ease my discomfort. On those days I wanted to crawl outside of my bones and skin to make it all go away.  I could think of nothing else. By the time I was dressed every morning, I was exhausted and the day had only begun.

My mother then insisted that my fine wispy hair find it’s way into an orderly braid or ponytail in spite of inevitable tears and objections that would follow.

So you can imagine my frustration with the red tulip shaped bucket meant for gardening. I wanted desperately to play in that dirt, to plant seeds and caress the “gworms” but I couldn’t stand the sensation across my hands. I repeatedly wiped the dirt off and then began the process again, futility fit for Sisyphus as I dug in with my little fingers only to extract them quickly in discomfort and cry for my mother to wash them again and again.

Table of Contents | Next >